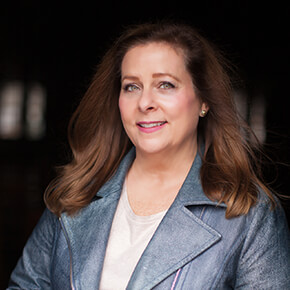 Amy’s book, Peace, Love, and Barbecue, which was co-authored with her dad, was nominated for a James Beard Foundation award and was awarded the National Barbecue Association Award of Excellence. Thanks to their book success, the Mills family spearheaded their own digital series, Peace, Love, and Barbecue, which debuted on YouTube in 2016. Their second book, Praise the Lard, was published in May 2017. 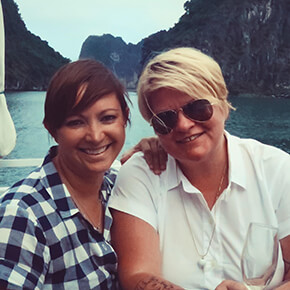 SEE THE RECIPE
LeAnn Mueller and Alison Clem
Owners and Pitmasters, la Barbecue
Austin, TX
LeAnn Mueller is a third-generation barbecue legacy — granddaughter of Louie Mueller, who started his famous barbecue restaurant in 1949, and daughter of Bobby Mueller, who carried on the tradition. Years later, LeAnn found herself in a unique position to take on that legacy and opened la Barbecue in 2012. Since launching to mass approval, la Barbecue has remained on Texas Monthly's Top 10 Best Barbecue list for 8 years.

There’s nothing like a sizzling romance and Mueller has proven that with her wife, Alison Clem, on and off the grill. Together they work at la Barbecue, which proudly stamps its female-owned, LBGTQ+ status on its website, and continuously wins the hearts of BBQ critics. In 2017, la Barbecue, which honors the legacy of Bobby Mueller while adding a twist to classic recipes, made it on Texas Monthly’s quadrennial list of Top 50 Barbecue Joints in the state and surpassed other highly regarded barbecue restaurants in local critic rankings. 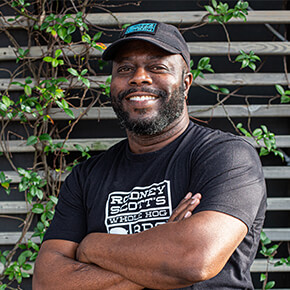 SEE THE RECIPE
Rodney Scott
Founder and Pitmaster, Rodney Scott’s Whole Hog BBQ
Charleston, SC & Birmingham, AL
Pitmaster Rodney Scott has been cooking whole-hog BBQ over wood coals since he was 11 years old. He spent the next 25 years working with his family in their BBQ stop in Hemingway, SC, until 2017, when he partnered with The Pihakis Restaurant Group and opened Rodney Scott’s Whole Hog BBQ in Charleston, SC. That same year the restaurant was named one the 50 Best New Restaurants by Bon Appetit Magazine, and in 2018 Scott was awarded the James Beard Foundation award for Outstanding Chef Southeast. Scott later introduced his famous vinegar-based "Rodney Sauce" and poured it into the hearts of BBQ lovers in Birmingham, AL. This location features his famous BBQ pit-cooked ribs, chicken and turkey. Soon, Scott will pour his famous sauce in Atlanta, GA, and is cooking up plans to open a second location in Birmingham in 2021.